“Women belong in the kitchen,” the burger chain announces, before adding the following tweets to their thread. 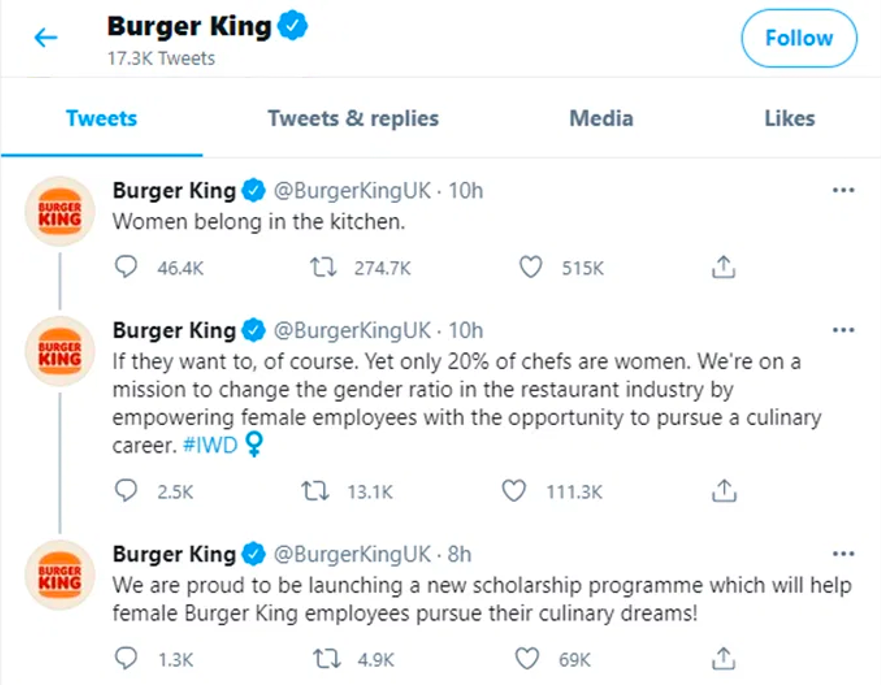 It’s clear that this was a successful, albeit misguided, attempt for the brand to gain attention, start conversations and perhaps stir up a little controversy.

I’d like to think most of us wouldn’t make the mistake of posting such a tweet on a day that is meant to “reflect on progress made, to call for change and to celebrate acts of courage and determination by ordinary women, who have played an extraordinary role in the history of their countries and communities.” And while that was Burger King’s biggest mistake, I think that a couple of smaller, more relatable mistakes lead them to think this was a good idea.

There’s room for humour in social media. In fact, it’s one place where personality and authenticity of voice can really move the needle for a brand. It’s been over four years since Wendy’s took to Twitter with a level of sass that took corporate accounts by storm. Even I tweeted at Wendy’s in the off chance they would respond to me, and they did! 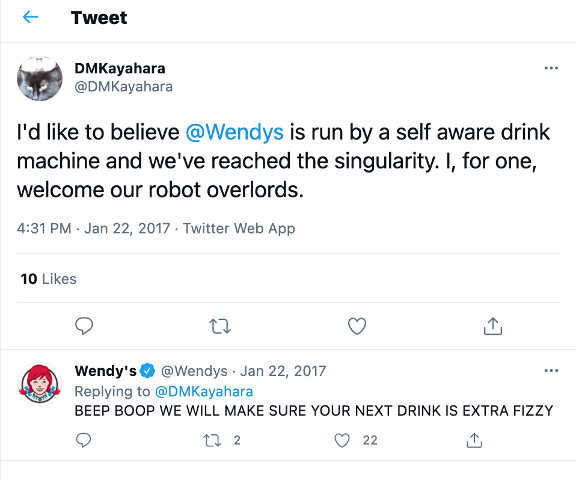 Since then, many brands have tried to follow in their footsteps, with varying degrees of success. It can’t be denied that Wendy’s understands their audience and has committed to a stream of content that is built to satisfy them. While I don’t question that Wendy’s would also be called to task for making a tweet like Burger King did, the precedent they’ve set might have changed the context. Burger King has no such history, which brought confusion to their message. This brings me to my second point.

2. Don’t Expect the Benefit of the Doubt

When the state of the world allows it, I attend comedy shows in small venues. As such, I have often witnessed the air being sucked out of the room as a comedian broaches a challenging subject. In that moment, the audience holds their breath until they can decern if something personal to them is about to be made the butt of a joke, or if they can trust the comedian on stage to handle a subject in both humour and good faith.

We do not inherently trust brands. We often assume they have motivations of their own or worse, ones that go against our own. This is the emotion Burger King was tapping into with their tweet, they viewed it as the hook that would get people to read and react to their thread. As has been pointed out, there is enough room in Twitter’s 280-character count limit to include both the first and second message in one tweet. In choosing not to do so, they missed their opportunity to treat the topic in good faith and lost the trust of those viewing the tweet.

3. Don’t Double Down on a Bad Take

It can be easy to grow defensive when you’ve made a mistake, and when Burger King UK began to be called out for their actions, both by individuals and by brands like KFC Gaming, they responded with tweets like this:

Why should Burger King delete their original tweet? Perhaps, because the tweets about the inequality of the culinary industry and their charitable initiatives were receiving roughly 5% of the engagement of the “Women belong in the kitchen,” tweet. It’s never fun to be held accountable for a mistake, especially one that you were sure was a good idea, but words have weight.

Burger King has since made an apology, though as I’m writing this, pieces of the campaign live on in print and on Instagram, but it may be too little too late for some. In an industry as competitive as fast food, consumers have the ability to be fickle. Will this hurt the Burger King in the long term? Maybe not, but if in the short term, some people prefer to give their money to the Dairy Queen, I’d understand.