Study: A Fresh Take on a Classic Beer Campaign for 1919

Little Brown Jug is a local client we always love working with because we share so many values. We’re both queer-led organizations that care about inclusivity, accessibility and doing things with heart. You might remember our Queer Beer campaign and product design from this year’s Pride festival, but when it came to marketing their flagship beer—1919—we had an exciting challenge on our hands. 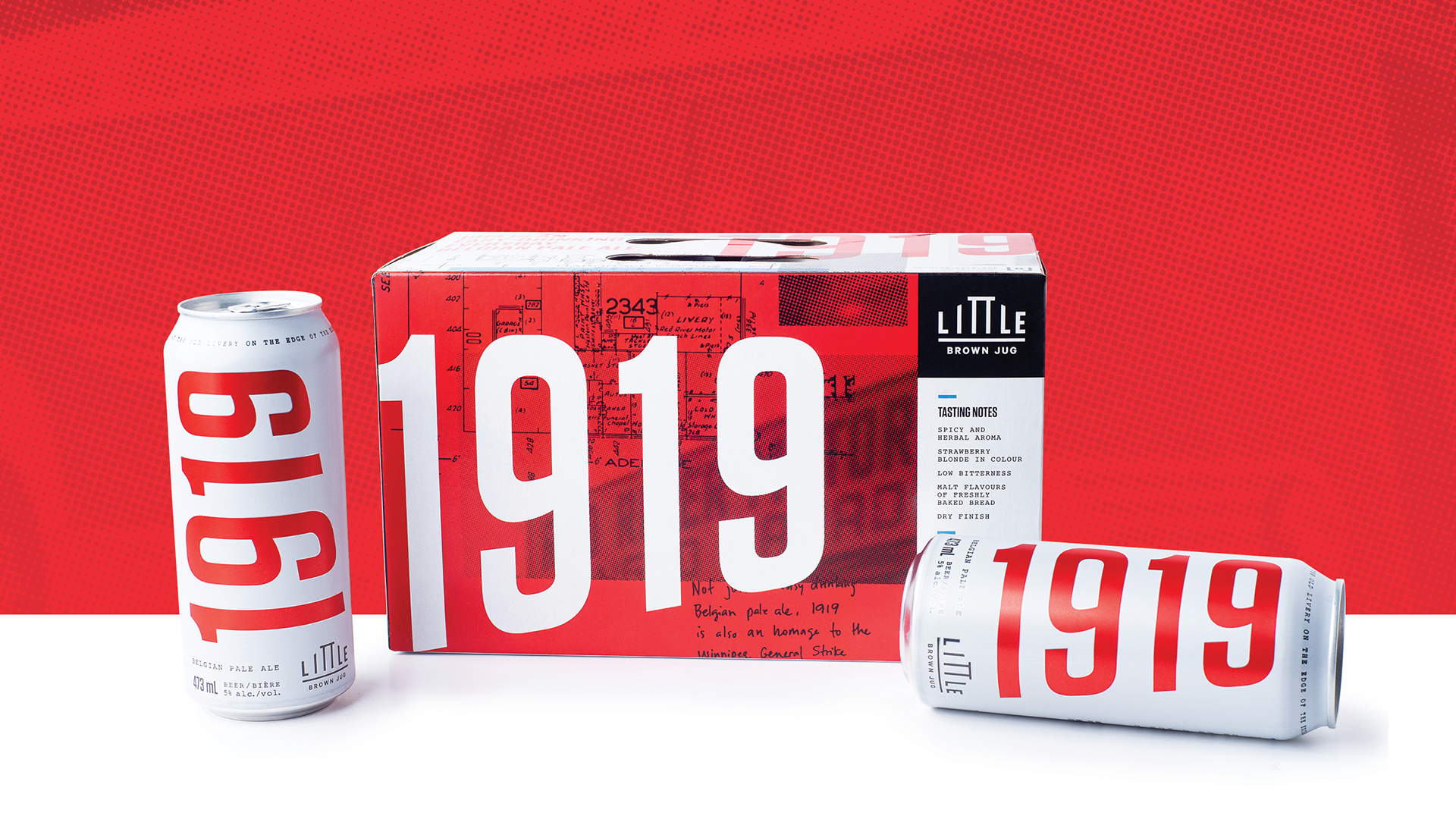 For its first few years in the market, Little Brown Jug exclusively offered their 1919 beer, focusing on perfecting their product and creating a strong offering that bridges the gap between standard issue and craft beer. It’s a better-quality offering than your basic beer—perfect for folks who aren’t huge beer aficionados but still appreciate a finer-tasting beverage after a long day. It’s already the best-selling craft beer in Manitoba, but for 1919 to keep growing in the local market and expanding into new regions, we needed to spread the word even further.

Little Brown Jug and 1919 are two separate entities. As a taproom, Little Brown Jug is an experience for locals and visitors, but for 1919, the intended demographic is even broader. They are looking to grow their share among primary beer drinkers in Manitoba and Saskatchewan—typically men ages 25–45—the same audience that beer giants like Budweiser and Coors speak to in their advertisements.

So, we challenged each other to figure out how their 1919 brand could connect with this demographic without abandoning its inclusive values or seeming inauthentic? We didn’t want to perpetuate toxic stereotypes or give off the same vibes as a ‘90s beer ad. We also needed to be mindful of strict rules around liquor advertising. (Oh—and we had to pull it off in just eight weeks!)

1919 is a really good beer—unpretentious and good for the sake of being good, not good in pursuit of praise and attention. This led us to think of our male friends who practice those values, too. We decided to highlight all the good guys that demonstrate our classic Canadian politeness and generosity in meaningful ways every day – that may sometimes go overlooked. The concept became: “The Good You Deserve.”

For our three video advertisements, developed for both television and online syndication, we showed vignettes of guys helping each other out, then treating themselves to a 1919 at the end of the day.

One ad showed friends helping each other move—a classic task delegated to friends that always ends with pizza and beer. The second ad showed a guy assisting a stranger in switching a tire, but the third—and perhaps our favourite execution—showed a rec league hockey team meeting at the bar after a game and presenting their volunteer team manager with a special jacket. Our creative director Brenlee Coates got the idea from an actual team in town, and their manager really did receive a jacket for his efforts—an act of gratitude that made him tear up with emotion. We took that same team and gave their manager a starring role in the commercial, recreating the moment when he received his team jacket at the end of a game.

For our out-of-home ads—billboards and bathroom stall posters—we created headlines that read more like positive affirmations and words of encouragement. That feel-good vibe, paired with a crystal-clear picture of a cold 1919—their signature tulip glass for the bar ads and the tall cans for the billboard ads—evoked warm feelings, self-love, and of course, a craving for some delicious local beer. The campaign was a huge success, and we couldn’t be prouder. It felt like a classic beer ad but with a dash of UpHouse style—warmth, heart, and authenticity. It wasn’t cheesy or cringe-inducing, it didn’t rely on tired, outdated tropes about men, and it really resonated with the intended audience. Little Brown Jug fielded more orders from restaurants and even got requests to bring their beer on tap based on requests driven by the restaurant ads.

People expect more from advertisers these days, and following old, classic formulas aren’t likely to hit the right notes. Here are some things we learned in our eight-week journey of developing and producing this innovative beer campaign.

Little Brown Jug already stands for a lot of wonderful things and means a lot to locals. Instead of abandoning the positive stake they have in their brand to serve a new market, they expanded their horizons without compromising what they stood for, giving another audience a chance to connect to them meaningfully.

Why hire actors to pretend to be a hockey team and spend loads of money on breaking in new equipment when we’ve got plenty of perfectly good rec league hockey teams in town? The camaraderie between the players is authentic, and it shows. You can’t buy that kind of realism!

Strive for Inclusivity, No Matter What

Our target demographic may have been men aged 25–45, but that doesn’t mean they’re the only ones worth featuring in the ads. We included folks of diverse backgrounds and genders because inclusivity and acceptance are values that Little Brown Jug and UpHouse will never compromise.

You can find 1919 at most Manitoban liquor marts and beer vendors, on tap at some of your favourite bars and establishments and it’s popping up in more places Canada-wide! We definitely recommend visiting their taproom if you get the chance—their patio is dog-friendly, and they’ve been known to host some pretty wicked drag shows.