A couple of months ago, there was this little show that came out—maybe you’ve heard of it—called Squid Game. With 142 million views in its first 28 days, it smashed Netflix’s viewership records and became all anyone could talk about for the next few weeks.

And as always, wherever popular media can be found, brands looking for clout are sure to follow. From hundreds of social posts, to NFL commercials, to a YouTube video that’s likely to surpass the show itself in views, brands rushed to capitalize on the popularity of the show with their own Squid Game-flavoured content.

Hmm… a major brand cashing in on a show about wealth inequality? In the biz, we call that “foreshadowing”.

On its own, this isn’t an uncommon occurrence (the same thing happened with 2020’s Tiger King), but it’s still worth talking about, if only for the lessons that we marketers can learn from it, especially when it comes to keeping our advertising efforts not just timely, but authentic as well.

One of the key things we strive for at Uphouse is to always be authentic, to always be true to ourselves and the brands we represent. Not only because it’s the ethical thing to do, but because it’s what works best.

In a recent survey done by Stackla, 90% of those polled indicated that authenticity was important to their brand decisions, but 51% believe most brands aren’t creating content they’d consider authentic.

It takes more than just lip service to reach your goals and serve your audience, it takes authenticity from the moment you start strategizing through your final execution and beyond. And, in the wake of Squid Game’s overwhelming popularity, many brands forgot to think with both their heads and their hearts, instead only focusing on capturing reach and engagement.

SPOILER ALERT! For the dozen-or-so people who haven’t watched Squid Game yet (hi, Grandma!), we dive into heavy spoiler territory from here on out, so be warned.

What sets Squid Game apart from other trendy pop culture clout-machines, besides being relentlessly bleak, is that it’s an explicit critique of both wealth inequality and capitalism itself. The show revolves around a group of desperate and indebted people competing in a series of deadly games for an ever-increasing sum of prize money. Hanging above their heads is a piggy bank of cash that gets filled a little more each time a contestant dies—literal blood money.

Needless to say, an earnest critique of capitalism-caused societal inequality doesn’t pair well with blatant attempts by those same capitalistic corporations to cash in on a trendy show. There are dozens of examples to choose from, ranging in tone-deafness from “obviously didn’t watch it” to “mocking real-world suffering”, but luckily Hyundai Worldwide gave us a perfect case study with one ill-fated tweet.

So what was the now-deleted tweet that rubbed people the wrong way? Here it is: 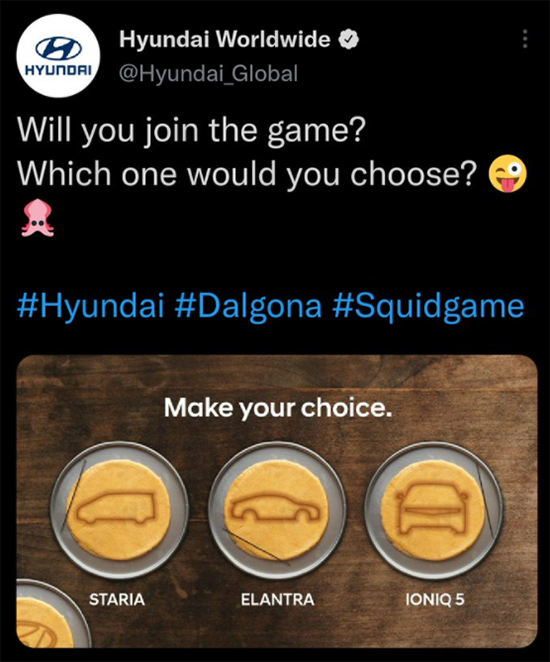 On the surface, it seems mild enough, definitely nothing to get up in arms about, especially considering all the other similar ads that ran at the time. It ticks all the boxes, hashtagging the show and referencing the dalgona candy game, where the characters were provided with a pin to carve out the shape in the centre of the candy without breaking it.

But remember, in the world of the show these characters were risking their lives, desperately trying to win enough money to escape debt, many being left jobless due to circumstances outside of their control. The main character himself, Seong Gi-hun, was laid off from his job at a car manufacturer after a union strike turned deadly at the hands of police (inspired by the real-life Ssangyong Motor strike in 2009).

So when Hyundai, a car manufacturing company whose workers have staged almost annual strikes since their union’s creation in 1987, posted a tweet referencing a show where desperate people risk their lives for financial security, it didn’t go well: 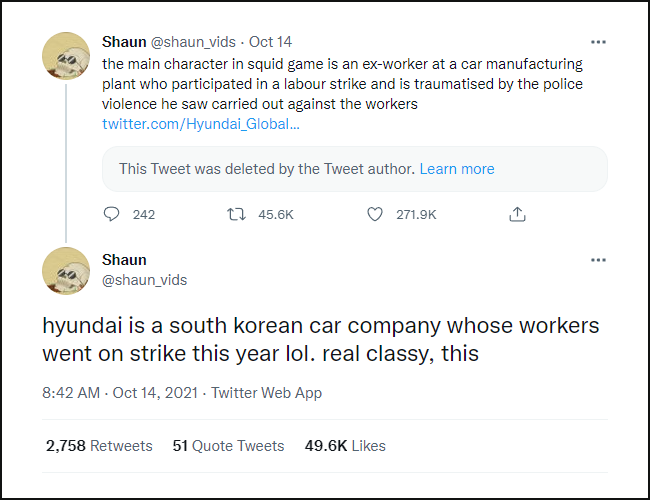 The tweet was torn apart both online and among more traditional media outlets—even NBC News joined in on the criticism—so it’s no surprise that it was deleted shortly after being posted. This sort of negative feedback could have easily been avoided had Hyundai’s marketing department thought about the situation from a place of authenticity, recognized some fairly obvious real-world parallels, and either adjusted their Squid Game themed content to be more empathetic or avoided the trend altogether.

While this cautionary tale may make it seem like capitalizing on pop culture trends is more trouble than it’s worth, a little bit of extra thought and honesty in your messaging goes a long way. For as many tone deaf clunkers as there are, there are just as many successful pieces—like this one from every digital marketer’s best friend, SEMRush: 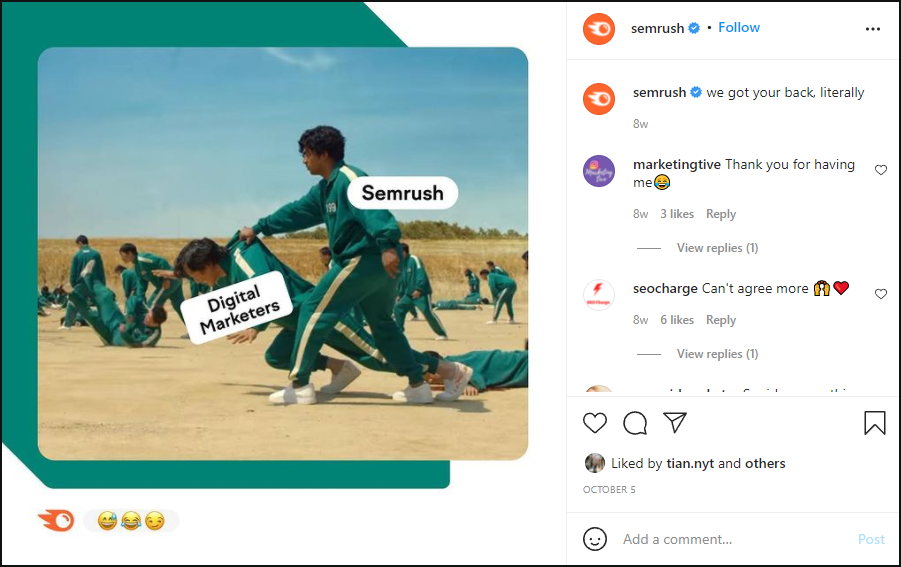 Pictured: me explaining SEO to clients

It still uses content from the show, but instead of focusing on the antagonistic relationship between the rich and poor, it emphasizes the humanity of the game participants. In this post, the viewer isn’t reminded of the power imbalance between corporations and consumers, instead SEMRush positions itself as an ally and teammate to their clients—a more considerate and authentic angle.

There’s definitely value to be had from being tuned-in to the social conversations your audience is having in online spaces, otherwise nobody would do it, but it’s equally important to keep in mind the greater context of the content you’re putting out in the world. It doesn’t matter if you’re the first brand to do the newest TikTok dance if it makes you look out of touch, phony, or even malicious. Taking that extra time to consider the sincerity of your message could mean the difference between viral success and being laughed or shamed off the internet. Keeping authenticity as your number one priority will take you further than any trend.